The project is a housing model located in Silicon Valley that takes the typological knowledge of the garage as a way to re-address suburbia and its non-nuclear family subjects. The project goes against the Eichler or Levittown model of post-war suburbia, even though it copies its repetitiveness, it does not elaborate the home with its symbolic value. It makes the home into an infrastructure, a method of construction in the form of a concrete plinth and a light timber frame attached to it. The project tackles the contemporary condition of the suburbanite not as the white heteronormative family but as that of the entrepreneurial subject with his three-business card life. The implications of this are imperative that we reframe given that this subject represents the overarching narrative of our existence today: productivity. Work has transformed into occupation, into ethos. A process which I locate starting with the desire for self-determination found in the projects that emerged in the disused residential garages such as the tinkering with neighbour’s appliances (as a way make extra money on the side) to the founding of Apple and every other successful tech-company operating today. This seemingly autonomous project has transformed into a state of serial narcissism and over identification with one’s occupation obliterating any ideas towards the collective. Yet its extremely problematic to propose an alternative which supports the collective in a suburban context, given that the suburb both in its physical and figurative construction embodies the American Dream as the land of the individual, both form the outdated yet-ever-present dream of owning one’s own home to its pathetic representation in the form of the picket fence.

Mobility, ownership and everyday life are currently being redefined by the tech-preneur and its corporations, yet the home which he inhabits has remained the same, failing to change the suburban fabric away from the traditional Family Home. It is incredible to think that Silicon Valley, a place which has created almost every technological innovation that has and will continue to change the global landscape in the way we live, work and socialise has made no attempt to change its domestic architectural language. Its fabric continues to be made up of mainly single family homes which continue to function according to outdated models of ownership, gender, permanence and labour inherited from the postwar era which establishes a continuity between race, sexuality, production and reproduction.

Thus as a way to contest this, the project takes the suburban home and its residential garage as spaces whose purpose is not simply to provide habitat to represent the individual, but rather as true performative devices, that tend to produce the subject they claim to shelter. The mom, the dad, the teenager, the child and the entrepreneur are the result of this architectural technologies of subjectivation. In the case of the nuclear family home we are presented with a hierarchical system with its allocation of square meters through architectural devices like master bedrooms, living rooms, back gardens and garages. These spatialise specific relationships and social interactions. The project, in antagonism to this, provides a modular system based on the parking lot grid (2.4x2.4 M) which defines every single space that can be occupied (to sleep, work or bathe) on the first floor of the typology. The project does not distinguish between activities or occupants by homogenising the space allocated for all domestic activities to the same square footage. It also allows for different inhabitation patterns to emerge by allowing the presence of un-programmed and generic space.

At the same time, the project questions the relevance of the residential garage today when the automobile industry with its one car per person rhetoric is in decline. We have reached an age of access where Google driverless cars, Uber’s, and corporate buses are going to become the prevalent mode of transport; a process which is palpable in the streets of Palo Alto and Mountain View. Thus the project posits the garage not as a parasite of the domestic sphere but as the locus of it and the frame upon which the sleeping and leisure arrangements are plugged into. The garage in its plinth form does not present itself as the traditional space for the car, neither as the space of work but rather as a polyvalent space which hosts a series of activities, from providing spaces that are appropriate for small enterprise, yet at the same time acting as the service core for the functional development of the domestic level, like communal kitchen and laundry.

The project investigates the origins of the Residential Garage as a way to understand how the invention of such a room played a key role in the creation of suburbia. Locating the garage and the car held inside it as a tool that allowed for land speculation to happen in the periphery of urban cores. But at the same time understanding the capacity this space has had in reconfiguring the most stable of social institutions: The Family. Since its insertion in the home by Frank Lloyd Wright in the Robie House, the garage called for the removal of the front porch and the parlour, the traditional spaces of family interaction and centralised this into one space: the living room.

Even though the garage became integrated into the household its identity would forever be distinct from the rest of the spaces surrounding it. It’s physical and psychological disconnection from the household allows for the space to present itself as a parallel one to the domestic one. This distinctness would be highlighted even more through the modernisation of the car and the introduction of the carport, another of Wright’s inventions. These successfully liberated the garage as a room solely dedicated to house the car and opened it up as the only room without a prescribed use, one that would radically reintroduce productivity into the purely residential zone of the suburb. It this through this move that we can also appreciate the garage not as a typology but as an attitude towards inhabiting: the garageification of space.

It is within this tendency to use space in less codified and ductile forms that the project’s urban strategy sits. The project in its block form strives to surpass the old conflict between work, live and leisure. Just like the garage has pointed through out its history that the distinction between residential, industrial and leisure spaces can not be zoned, it actively contests the outdated planning logic of zoning carried out by municipalities. Thus the project rethinks the home as a way to rethink suburbia. 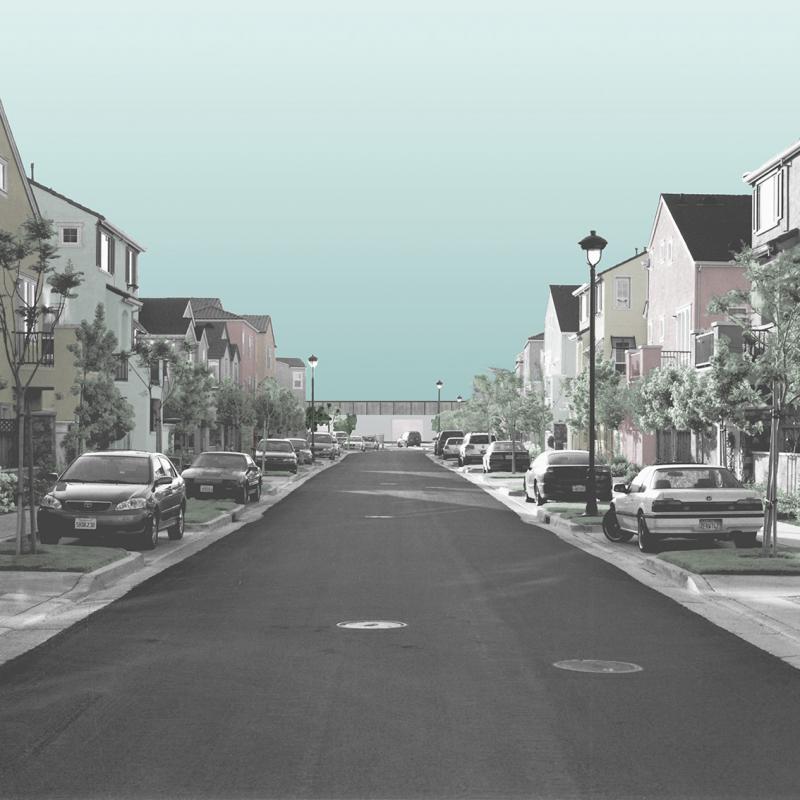 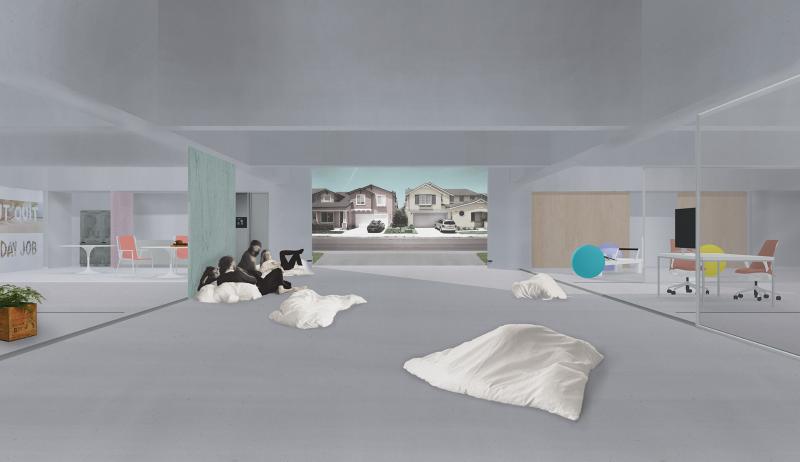 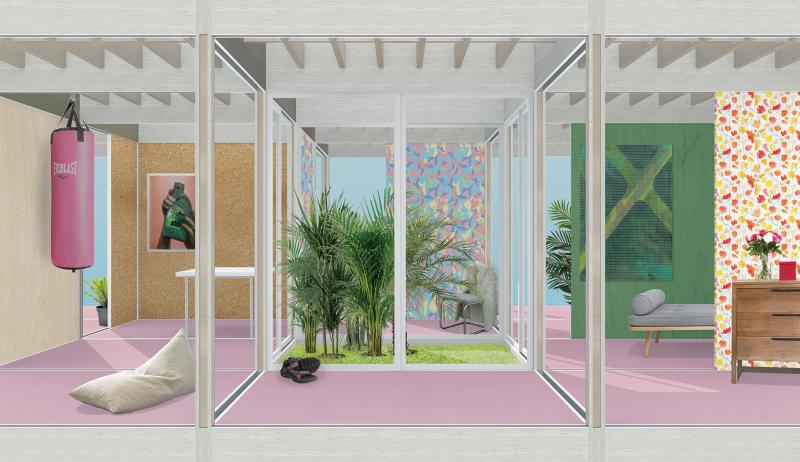 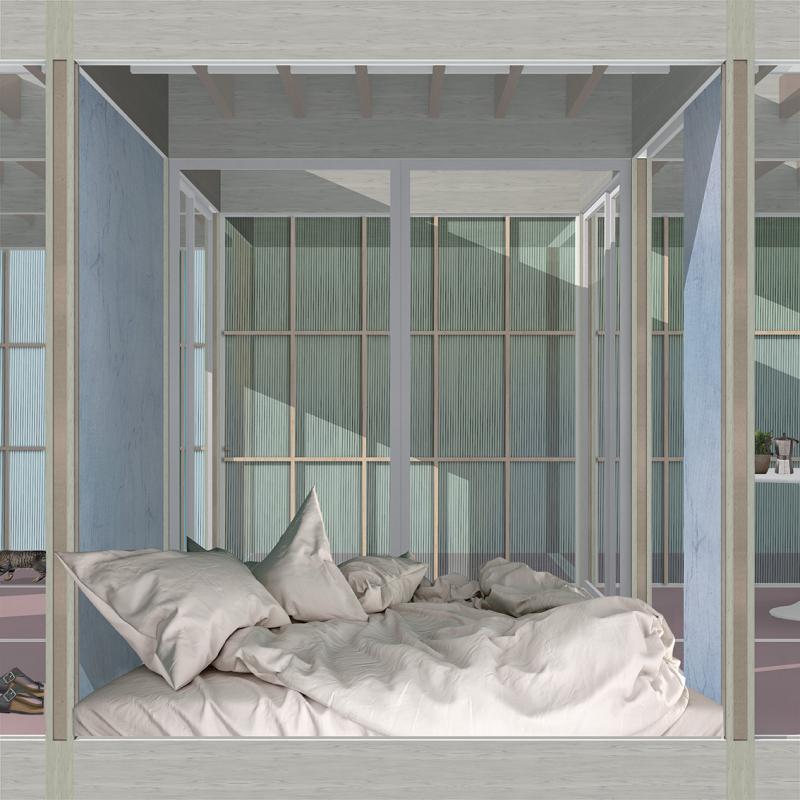