AN ISLAND IS LAND

As a resource, territory opens up the possibility to exploit. Comprehensively with mines and fields as well as indirectly with people and their skills.

Just like nature, space gradually loses part of its former vital dimension, in order to become fully measurable, quantifiable and exploitable. Territory is from the start inseparable from practices such as survey and cartography that were meant to provide a panoptic overview of what is available, in what quantity and where.

Geographers say that there are 2 kinds of islands. Continental Islands and oceanic islands. “Continental islands are accidental, derived islands.” They are pieces of land, which have been detached from the continental mass by surface erosion or by violent separation such as earthquake.
Oceanic Islands are originary, essential islands. Some are formed from coral reefs and display a genuine organism. Others emerge from underwater eruptions. Some rise slowly; some disappear and then return.

These two kinds of islands, continental and oceanic, reveal a profound opposition between ocean and sea. Continental islands serve as a reminder that the sea is on top of the earth but oceanic islands that the earth is still there, under the sea, gathering its strength to punch through to the surface.

I would like to add a third category to Deleuze’s distinction and propose another kind of island, an island which is entirely man-made and which does not respond to geological forces or to continental drifts, but to the forces of man’s power of construction and invention. These are artificial islands, where nature is pure engineering and pure commerce.

The Chinese have been habitually establishing artificial islands in the South China Sea in order to extend their projects in oil exploration and national security. However, this was challenged when The Philippines scuttled or intentionally crashed a ship to symbolize that part of these waters are within the Philippine’s Exclusive Economic Zone (EEZ). These claims were made under the UN Convention on the Law of the Sea (UNCLOS) which states that an island is any settlement that is both inhabited and able to sustain economic growth and that whatever is within a particular state’s EEZ is the property of that state.

Six years later, the Declaration on the Conduct of Parties in the South China Sea was signed in 2005 by all countries in this region, "to resolve their territorial and jurisdictional disputes by peaceful means”. Thus the Chinese have been left with only the measures for “peaceful attack”. That is, assigning coastguards to patrol the area within a 200m radius around the ship, daily.

Meanwhile, the Sierra Madre ship is inhabited and domesticated by its residents. Eleven Philippine marines man the ship, changing shifts every three months. Their daily life is spent merely on recreational activities such as fishing, playing board games and watching DVDs, relying on food coming in on small boats from the mainland. The ship itself is a wreck, with the accomodation quarters left totally inaccessible due to rust. Therefore, the residents have built their own structural additions to inhabit the boat, as building materials came alongside their other resources.

However, upon realization of this building-taking place, on March 9 2005, Chinese vessels blocked a resupply mission to the shoal by the Philippines. Since then, provisions to the shipwreck could not arrive on waterway and the Philippine air force has been responsible for airdropping only essential life-sustaining food and water bi-weekly as well as barrels of fuel for the generator that provides them with electricity.

In this case, the continual residence within the shipwreck plays an important role as a symbol of Philippine sovereignty within the South China Sea. Without it, the Chinese could continue the growth of their empire of island factories in these waters.

This takes me to another disputed territory.
The chosen site is on the existing island of Navassa. Navassa Island is a small, uninhabited and disputed island in the Caribbean Sea approximately 2 square miles (5.2 km2) in area. It is located almost equidistantly from the coasts of Haiti, Jamaica and Cuba.

The land is covered with one main resource – Guano. Five million sea gulls occupy Navassa as the single rural resting spot within the expanse of the Caribbean Sea. Their droppings are the first step in the long-term production of Guano, a so-called “brown gold” and a rich natural fertilizer desired by 5 million small organic farms in America, Jamaica, Haiti and Cuba. Until now, the island has been an unofficial country of its own, with its own unofficial flag yet unclaimed due to its non-human population and controversial location.

In the 19th Century, the Americans wrote the Guano Act, which allowed them ownership over every island that has guano, claiming their first “guano colonies” outside of the USA.

Since January this year, with communications between the US and Cuba reignited and trade boundaries lifted, the Cubans propose to be the first to claim Navassa for its much needed resources in order to grow their economy. If extracted, Navassa’s guano could generate $2 billion per year, a massive input in Cuban GDP.

And the only way to claim it would be to extend Cuba’s sea territory. Where an extension of their exclusive economic zone can only occur through the establishment of a natural island.

But how might Cuba give birth to an island, naturally, in a site of their choosing?

Perhaps it’s a question of how we define the boundaries between natural and artificial.

Technically, this process is explored through the manipulation of natural ocean currents and optimizing these manipulations to create the maximum deposition of sand until an island is formed. Thus, creating an artificial island naturally. And it is here that Navassa itself presents a problem. An oceanic island that if populated by humans would endanger the bird eco-system. To build on it would be an invasion. Yet the technology explored through the TS would allow for the gradual formation of islands that could birth an infrastructure to harvest Navassa’s unique resource. A pre-fabricated catalyst to generate a softer context.

Year one Cuba sends a fleet of barges and floating cranes to deposit 55 prefabricated sponson devices in the seabed immediately next to Navassa in order to start of the geological process of the formation of islands.

After 26 years, once the islands have broken the surface, a series of territories are generated for inhabitation and accessibility zones are assigned over this broaden archipelago. 20% of the residential territory would be offered to food growing areas giving each household 20 square meters of land.

In Cuba there is large number of people that are in exile within their own country and are enlisted by the Cuban government and sent to Navassa to become the first guano pioneers and form a basis for Cuba to claim their islands for its own since convention states that an island that cannot sustain human inhabitation will not give the state an exclusive economic zone.

Initially the formation of the islands will not give rise to any suspicions by the neighbouring states but as soon as the islands were inhabited Haiti and Jamaica intervened in a similar manner as the Chinese did in the Spratly Islands intercepting food supplies, employing fireworks and small cannons to scare the sea-gulls and reduce the guano production as well as starting a diplomatic episode with the Cuban government. This whole dispute has now been going on for almost 50 years.

Over a period of 70 years these deep ocean currents drive sediment upwards. As the sediment breaks through sea level, land forms an island and Cuba’s economic zone is extended outwards from this formation 47 km at its southern part. The disputed island of Navassa and its adjacent infrastructure, is wholly and legally a territory of Cuba which brings all the territorial disputes to an abrupt end.

The introduced infrastructure is a series of networked elevated platforms, that has houses the 600 Guano workers in a self sustaining system incorporating food growing areas within each of the platforms. Structurally the platforms are supported by the original sponson devices imbedded within the newly formed islands. The height of the platforms is dictated by the potential future growth of the islands below.

Just as oceanic and continental islands invert the relationships between land and sea. Here, architecture inverts the established relationship of territory and sovereignty. Where in the 21st century territoriality is reborn as a catalyst for ownership and occupation. 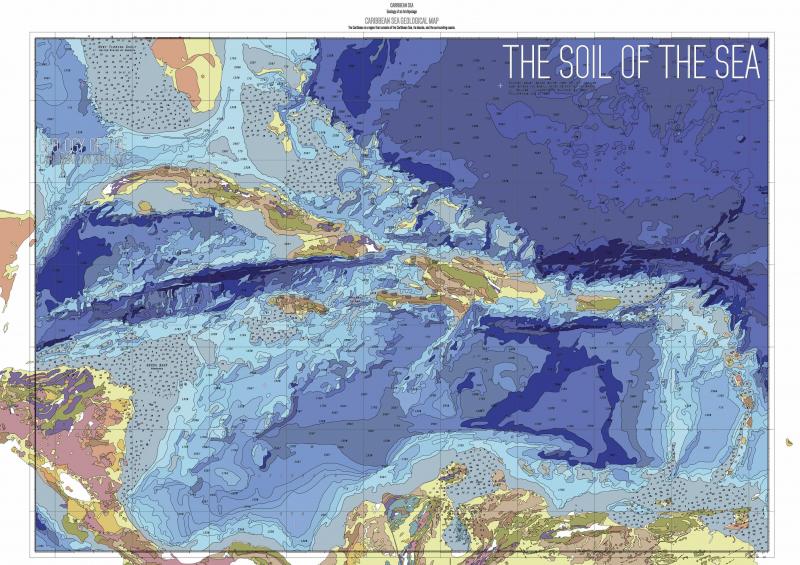