The natural conditions of Hong Kong have promoted it into a border city that is constantly mitigating among conflicting systems of knowledge. It is through Hong Kong that we unroll both the European and Chinese approaches towards Climate and Architecture. From scientific knowledge production sites in Germany in 18th century to contemporary urbanization along the coast of China, this European knowledge of Urban Planning was mobilized, circulated and misinterpreted in the context of Mainland China as a pure GDP generating machine today. Instead of continuing exploiting the border spaces for financial experiments, the project puts forward a set of strategic propositions for the border zones so they emerge into an institution to co-produce contemporary knowledge on the renewed relationship between Climate and Architecture, further intensifying constant exchanges between Europe and China through climatic expeditions.

The Chinese fengshui knowledge informs an ideal condition for human dwelling: one should always settle in the middle, between highlands (at the back) and overlooking water in front. The black dots indicate locations of historical capitals of China, and they are always around the flat land that is known as the Middle Kingdom of China. This imperial system pushes Hong Kong over the edge of the Kingdom, while exposing it alternatively to the European system of scientific navigation, as well as multiple systems of knowledge from its neighbouring countries and territories.

Contemporary borders between China and the former West.

A much reduced story on the mobilisation of the German Climatic Architecture (Urban Planning methodology) to rest of the world. 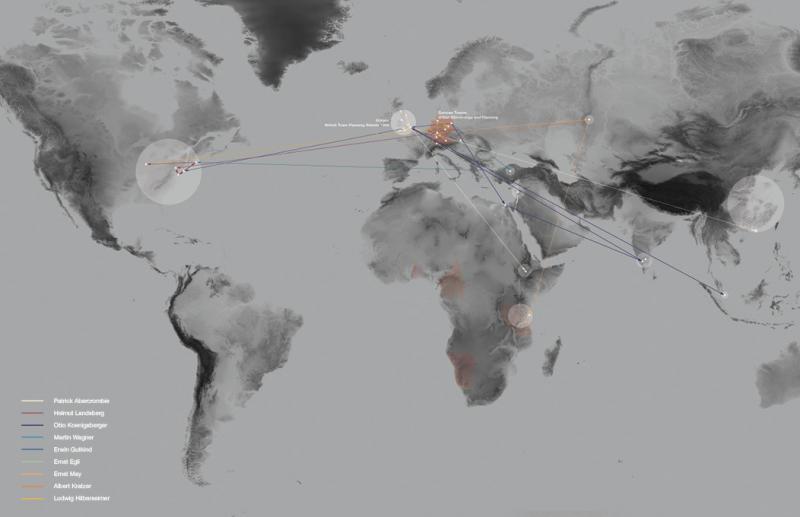 With full credits to the PUMA archive of World Bank (2014), this map visualizes the satellite detected urban transformations in China. Note the intensification along the coast. 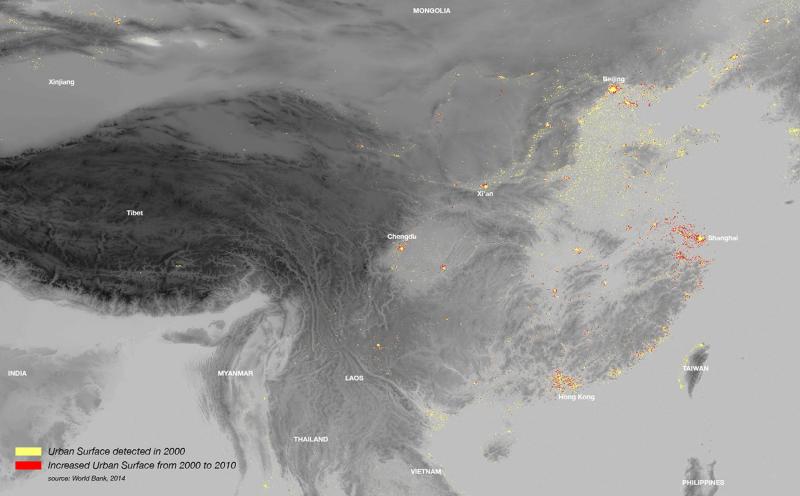 The World Meteorological Organization (WMO) is an intricate architecture that manages to talk and work with both human expertise and and non-human technologies (little dots indicate locations of participating surface weather-monitering stations) across myriad systems of knowledge, cultures and politics. This is how we should approach the contemporary border conditions beyond localist cognition.

Urbanization in the Pearl Delta Region, 2014

Satellite detection of urban surfaces in white pixels as in 2014 - 30 years after the Special Economic Zone project through the border between Mainland China and Hong Kong. 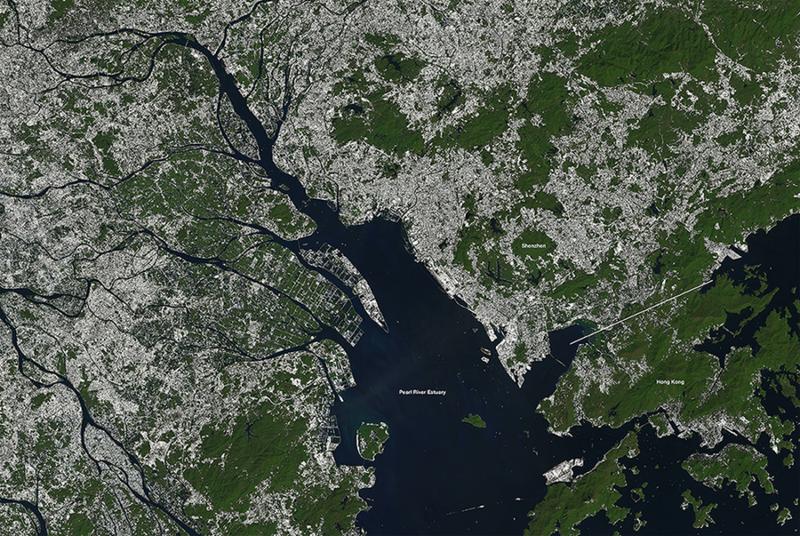 The city of Hong Kong is a territory in itself, fully charged with border conditions. Borders of Hong Kong: can a single border mechanism handle the complexity of this territory?

Climatology as architectural device to reorganise the relationship between the City and its surrounding Nature. 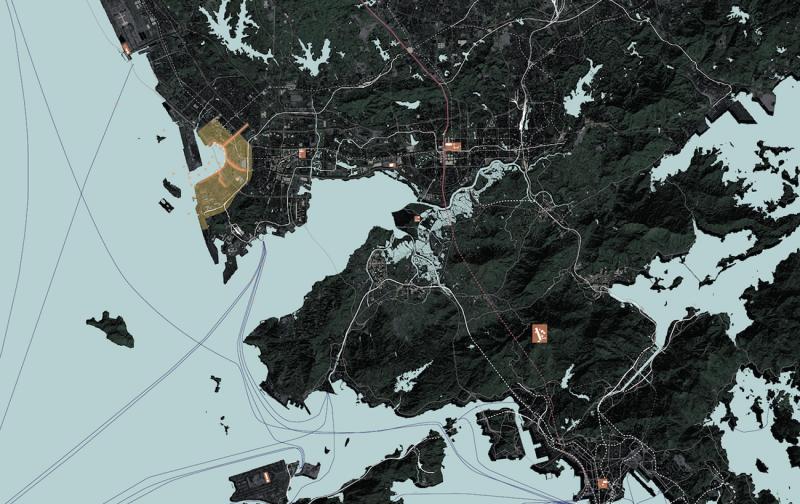 Intensification of meteorological expeditions and knowledge production on the landscape. 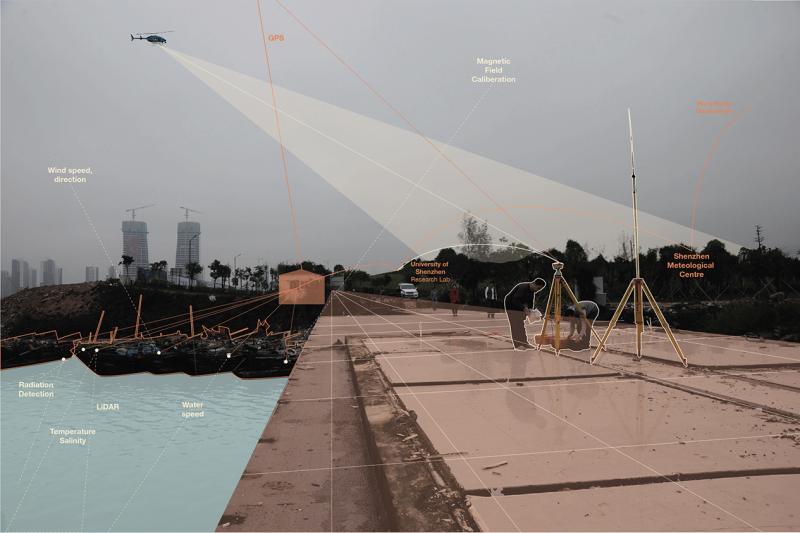 Scenario 3: Along the River

Geological corridors emerging as the new border spaces in contemporary China by incorporating both human and non-human inputs. Updated data and information of the landscape will be returned into city centres for debates so a relationship between urban and natural is constantly reshaped and strengthened. 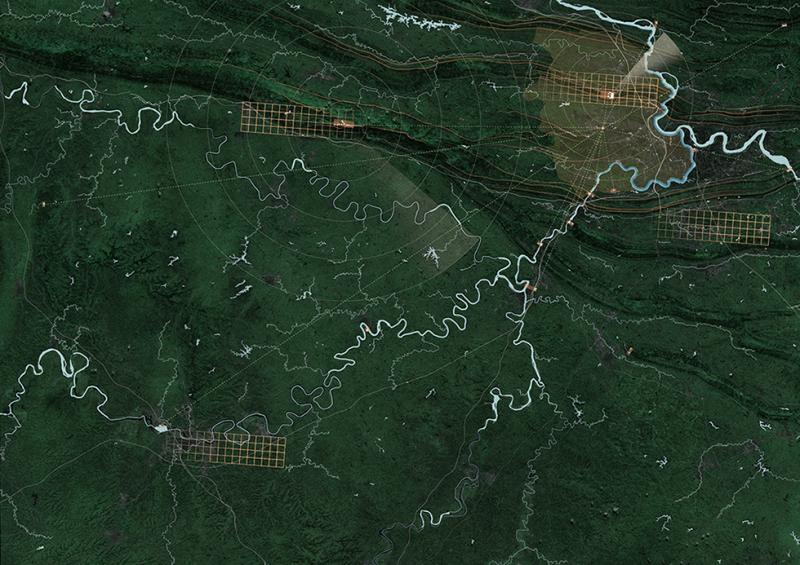