The gradual shift of political power to corporations has become excessive, endangering the credibility of representative democracy. The 2010 coalition government fostered such high hopes and promises. That perhaps there was going to be positive change. However, the Conservatives majority government formed in May justifies the pro-business nature which governs us.

We must stop pretending this country is of fair play politics.However grim the reality is, inevitably it implies a political vision.

The Palace of Westminster is falling down! It is in need of serious repairs, which is estimated to take five years and 3 billion pounds to tax payers. The projects unveils the grim reality of the gradual shift of political power to corporations, the utmost exploitation, hierarchical grimness and ruthless lust for power, wealth and status.
The New Westminster celebrates a business ontology in which it is seen obvious that the government too should be run as a business. The Conservatives winning a majority justifies the pro-business nature which governs us today.
Questioning the serious threat and credibility of representative democracy when there are many mechanisms to construct public opinions and consensus. When there are strategic sites for powers to manipulate and wholly reinvent ideas. The project does not try to provide a solution to such a complex issue. However to identify its core characteristic to provide a platform of discussion. However grim the reality must be, inevitably it implies a political vision and there is importance and value in recognizing the issue. Until we re-engage with the problem, only then can we re-establish a new political form. 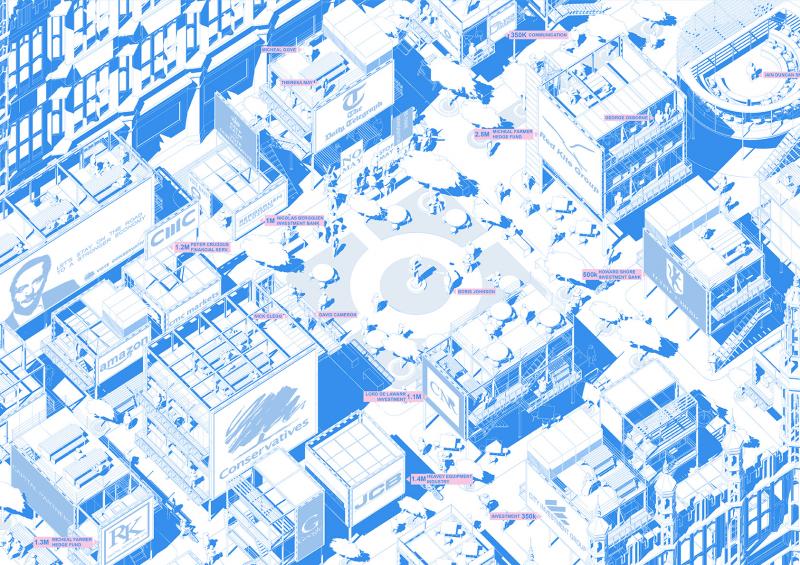 Today’s ‘so called’ democratic policies are being purchased as commodities and insurance, with the government and corporations sitting at the center of this peculiar system. With over 60 percent of MPs having second jobs in the private sector, it is reasonable to argue the co-existence between the two parties. With large sponsorship money flowing into political parties during election periods, alarming rate of revolving door politics and most of all the unaccountability of large corporations in the UK are all indicators of the tight cosy bond and in-depth institutional level relationship between major private sectors.
Within the new parliament, key facilities are provided such as brothels, wine bars, Michelin star restaurants, private rooms to accommodate numerous back deals, briberies, backstabbing and partnership of all sorts.
By sponsoring a political party, considering the price, the corporations are buying structures that offer them connection to government officials. 1m2 will cost £25,000 however closer to the central Houses of Commons, the prices increase. The ruthless pragmatism and economical drive mimics the current situation of London where, area is money and land value increases towards the center.

“We shape our buildings, and afterwards our building shape us” Winston Churchill
Churchill stated this after the House of Commons was rebuilt in 1943, when the last raid of bombs destroyed it on the night of May 10th, 1941.
The new House of Common is an honest manifestation of the current government’s ideology and value. A government which values corporations over people. A government which values money over freedom. A government which values lies over honesty. The government legitimizes acts in the name of economic stability. What we are witnessing is a revolving door politics into places where polices are written and enforced. Therefore the new Houses of Commons does not suggest a traditional two way debating chamber, however similar to a lecture theatre where hierarchy is pre-established between speaker and listeners. Where important CEO’s of corporations and rich donors of political parties have such strong political influence to MPs and governments officials to regulate the outcome of certain policies.
The new parliament celebrates the pure confrontation of reality, a political system where the overwhelming power of corporations has unconscious control over all of us. 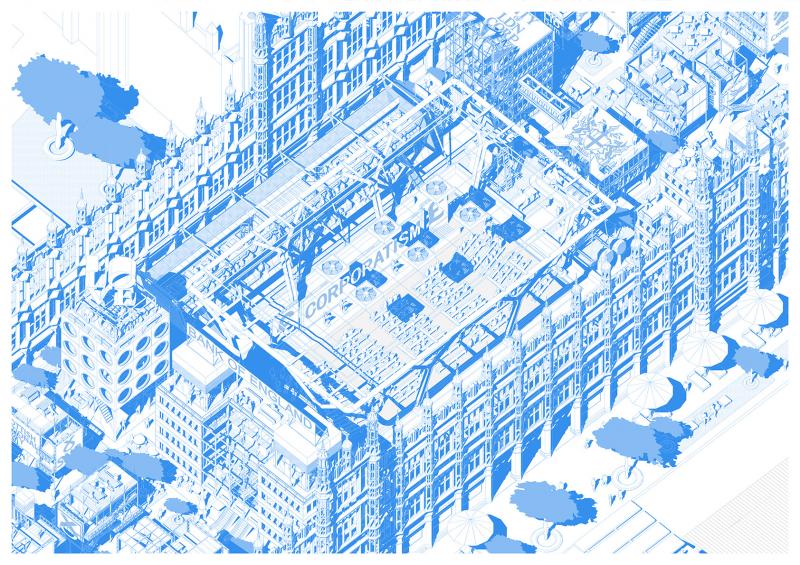 Money, Status & Power is everything!

The height of sophistication is acquired by the art collection of Cezenne, Gogin, Picaso, Goh which helps to display status and personality, whilst differentiating themselves over competitors.
Furnishing by Mies, by Corb are essential corporate signifiers. The exclusivity and importance is strengthened to establish a strong corporate identity that communicates in an effective and persuasive manner of qualities, values and success to potential clients. 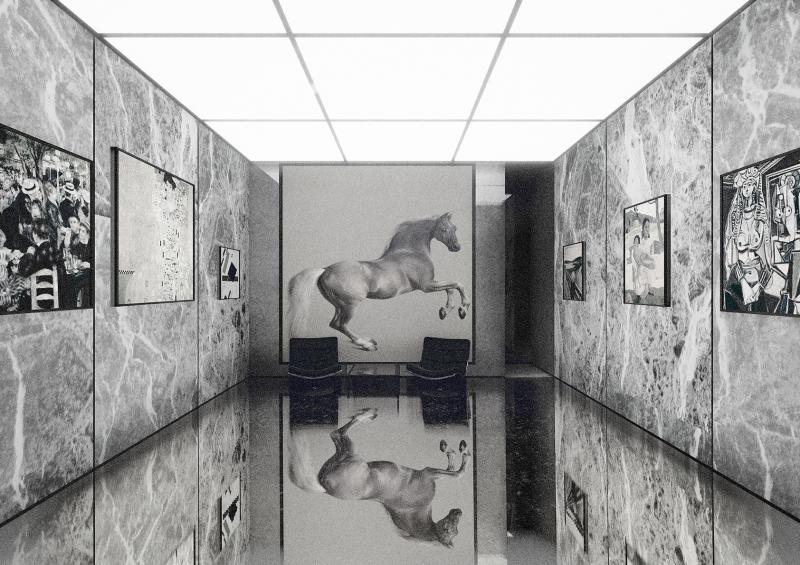 Transitory Parliament Towards an escape to an alternative political system

Excellence comes as a standard, where power and wealth is further expressed through the interior materialistic qualities.

Within the walls of Westminster, preserved to emphasise the clear cut boundaries in relation to the site, is an honest manifestation of the government’s ideology.

The attempt to unveil its utmost exploitation, hierarchical grimness and ruthless lust for power and money.