Trake is a social housing project for 4600 students and young professionals located in Belgrade. By looking at a precarious subject, the project responds to the present condition of an entire generation, the so-called "war babies".
Mindful of the failure of the Yugoslavia Dream they find themselves stuck, today, in an economic and social condition of both proximity and isolation towards Europe. Trake is an attempt to formulate a new architectural language against the traditional housing typology of the family apartment. Located in the heart of the city of Belgrade, on the Sava riverbank , the project addresses the scale of room, block and street and has to be understood as both an urban strategy as well as an interior architecture experiment.

The design of the room is deducted from a new interpretation of the table. Liberated by its role as the multipurpose point for the traditional Serbian family, the table becomes the place for the emancipation and resistance of the "self".The room as the study of 1.8 m x 2.7 m becomes the central point from which the rest of the apartment is deducted and hierarchically organised. The architecture of the room follows a new logic, where series of thick walls equally distanced (2.6m) define the space , following a gradient from the private study to a the public shared space. The architecture eliminates the partition wall as the actor of social division, and rather allows furnitures and flexible panels to determine the size of a room. Other than the table, which is fixed and cast in situ as the rest of the load bearing walls, the furniture are modular pieces. They can serve different uses depending on their position in between the walls. The minimum dimension of a room for a single person is 24 meter square, but the high flexibility permits the expansion of the single cell into a larger room for 2 to 3 people (expanding up to 80 meter square).
In doing so, Trakes challenges the traditional approach to architecture by promoting a space which asks for a continuous compromise between being alone and being together.This dualism perpetuates at the level of the block.

The walls, resembling theatrical wings, gradually become thinner and thinner from the first to the last floors. The extension of a room experienced at the lower levels, is restricted at the upper floors, where only single’s cells dominate the environment.The upper floorscells could potentially be rented only as workspaces. In its entirety, the block embodies the contrast between formal and informal, by providing multiple spatial configuration in the inside, and a generic and severe façade to the outside. The procession of the interior, from a more public space to a private oneboth in plan and section, continues outside, where the boundaries between built and unbuilt are hard to trace.
The organisation of the blocks, at a larger scale, follows an apparent rigid structure deducted from the subdivision of the site in strips of equal width of 32m. By considering the urban project, as both constituted of built and un-built the urban strategy is the result of the interrelation of layers or layout of plantations, sport facilities, path and routes, trees and greenery. The coexistence of these different systems throughout the site and scans the activities taking place in the different strips. The construction of the built environment follows a logic of phases, where the completion generates a regular rhythm between landscape and architecture.

The built strips are not continuous, but rather stop in proximity to the existing buildings.Therefore the blocks follow a modular logic, where the maximum length is related to the density : a maximum of 400 people per building, where the maximum module dimensions are 32 x 100m.The strips are not autonomous objects, but rather complementary realities broken by underground passageways and larger paths,allowing for a continuous procession. In the equal spacing of the soft and the rigid strips happens the dialogue between a moment of social engagement and another one of intellectual contemplation. Different commercial activities take place at the edges of the strips facing the gardens, whereas public facilities (laundrette, bicycle storages) theatres gyms and auditorium occupy the central space of the ground floor. Trake is an urban strategy prototype , able to adapt to any type of sites along the river. No individual rooms face the quay but rather indoor shared areas and open landscapes. The street acquires a different connotation and it is replaced by the river: a contemporary urban connection between Belgrade and other urban conditions.

The economic framework that Trake adopts is the one of Co-housing. The funding of the project happens through the intervention of different clients in a public/private joint venture: Going against the socialist idea of a “house for life”, the project sees the house property market as a constantly changing reality. In this sense the apartment of the housing project, contrary to the shopping spaces at the lower level, can never be bought but only rented with low fixed rates. Extremely short and flexible contracts ( of 4 years + 4 years maximum) allow for a high mobility within the blocks. Only 25% of the housing property is subject to increase of rent to be determined by the Council of the Co-housing and the Student council. 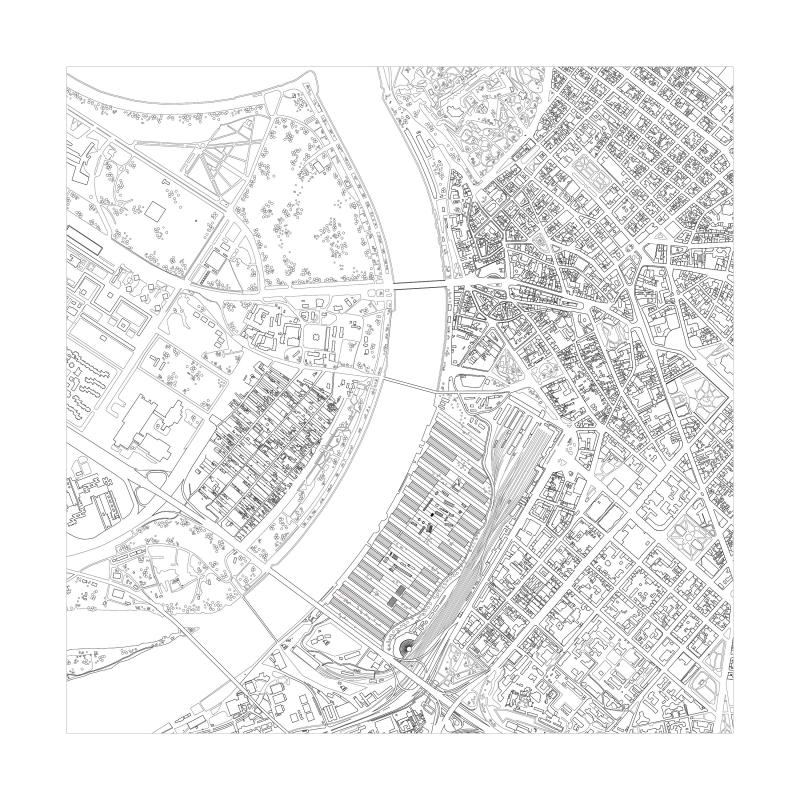 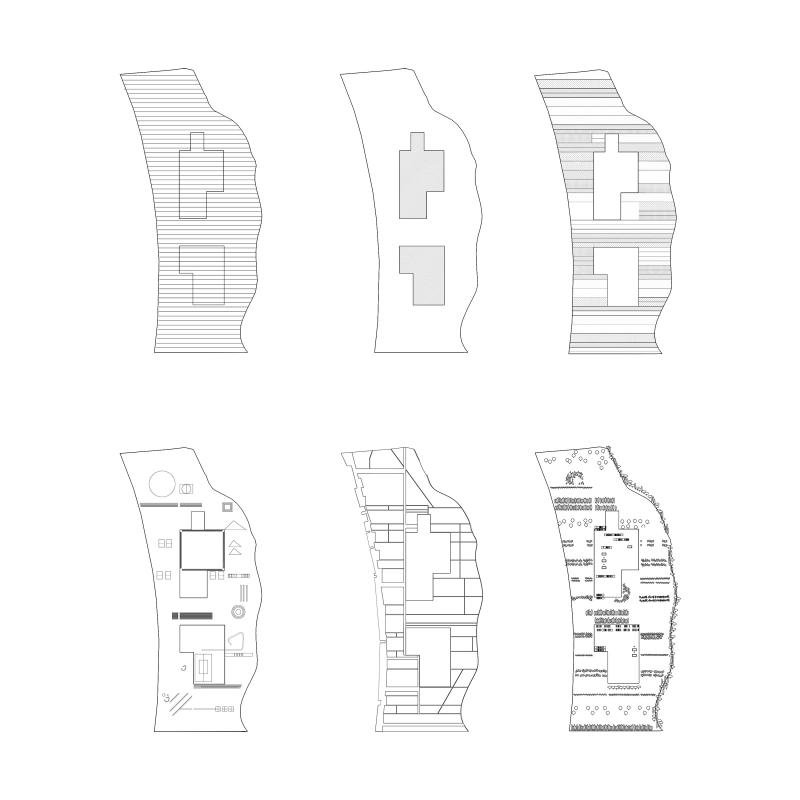 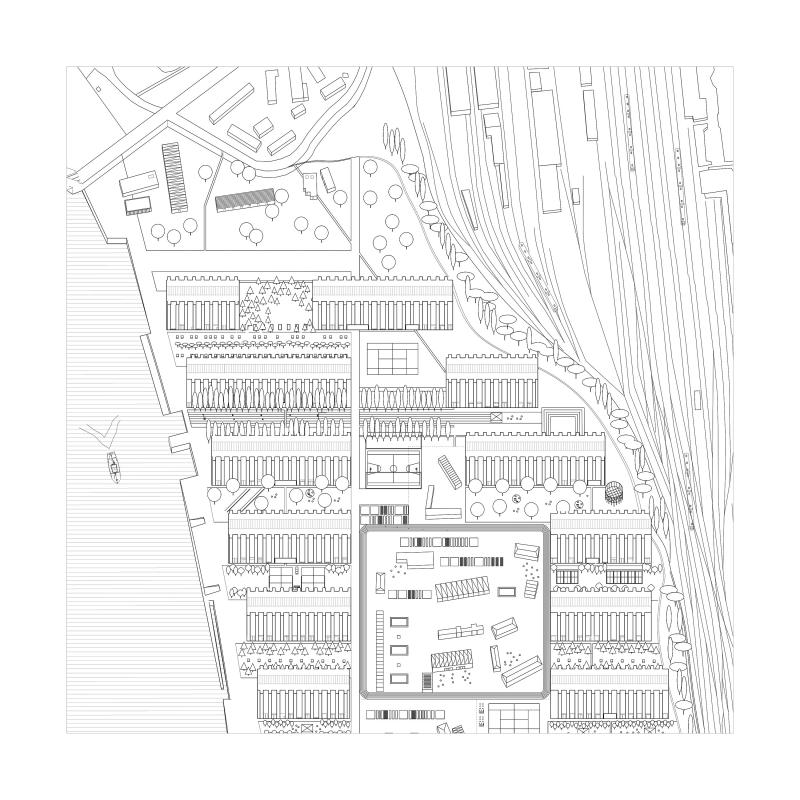 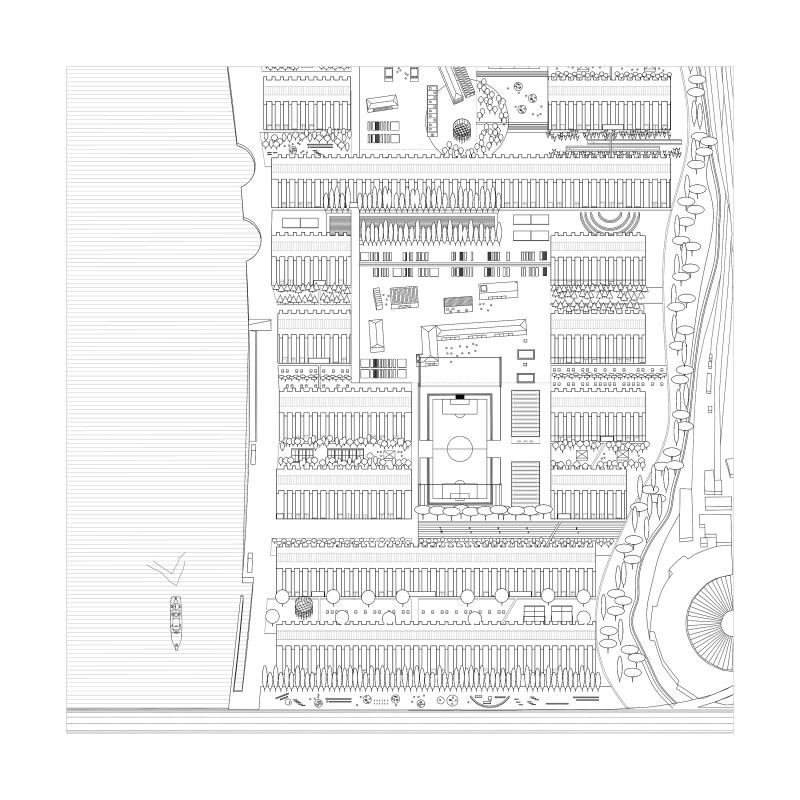 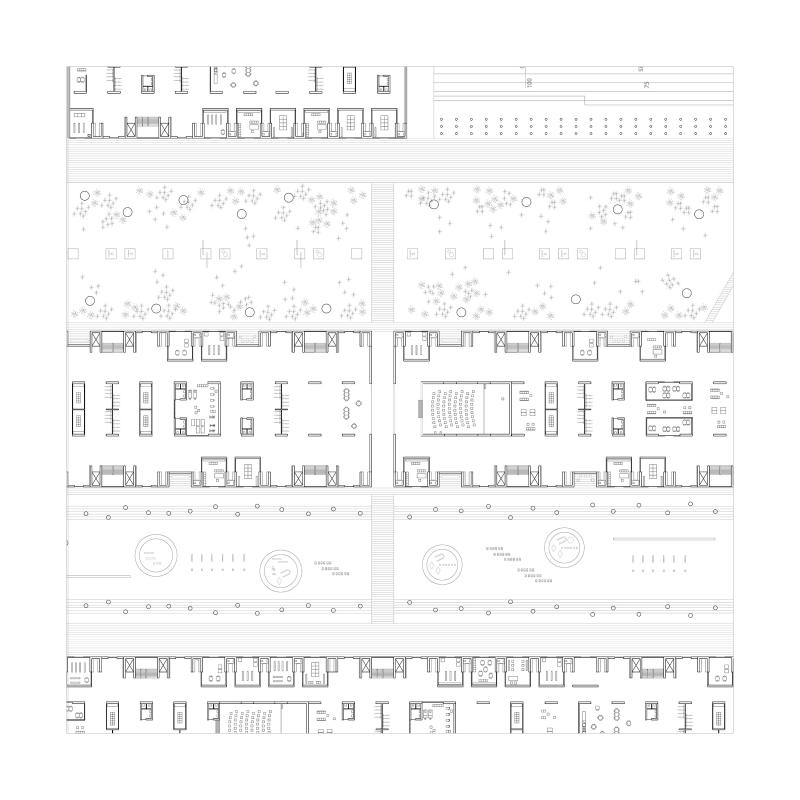 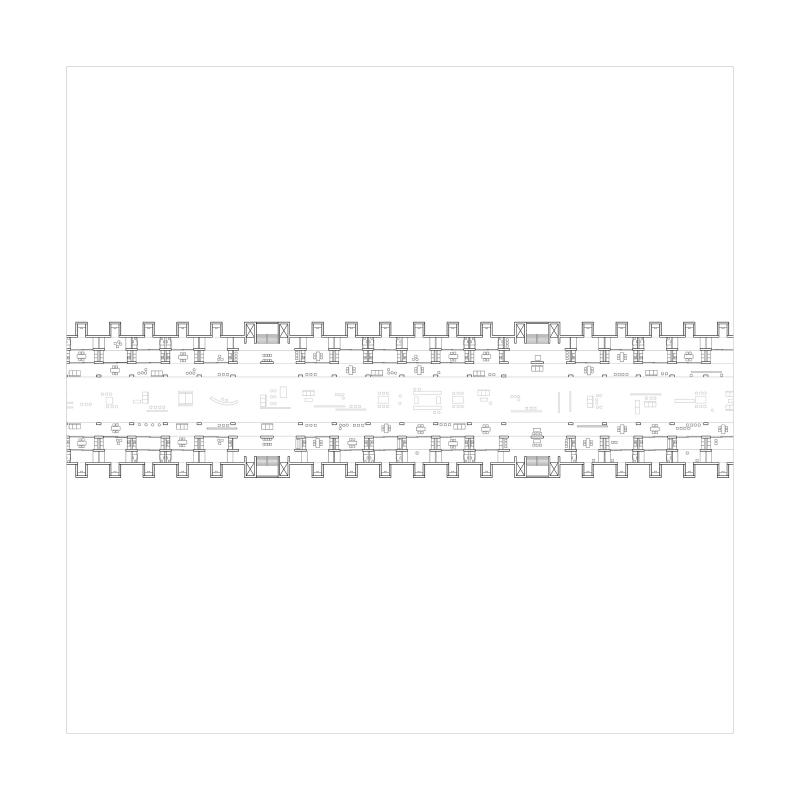 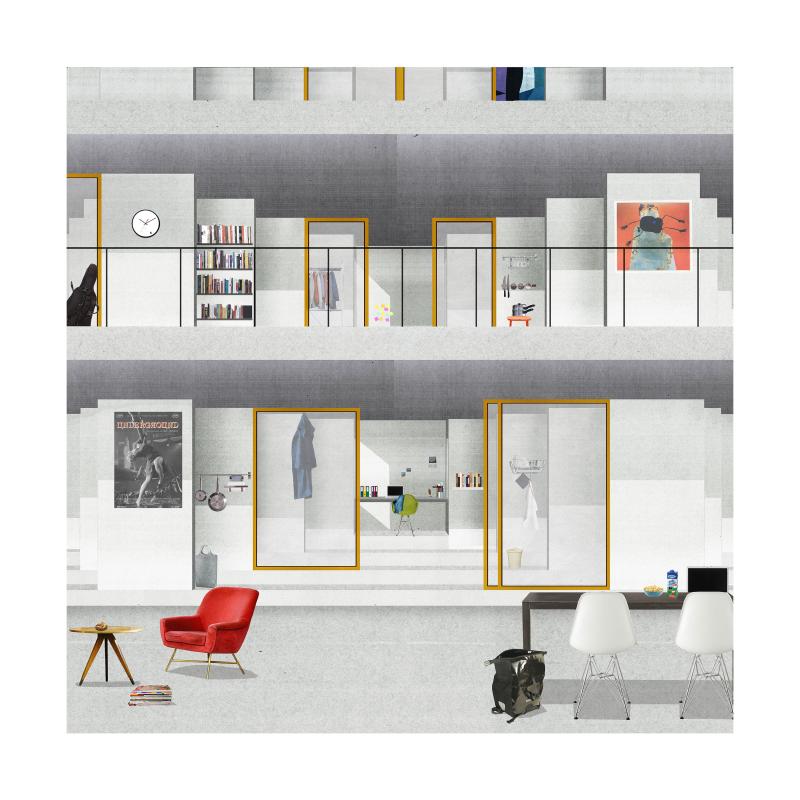 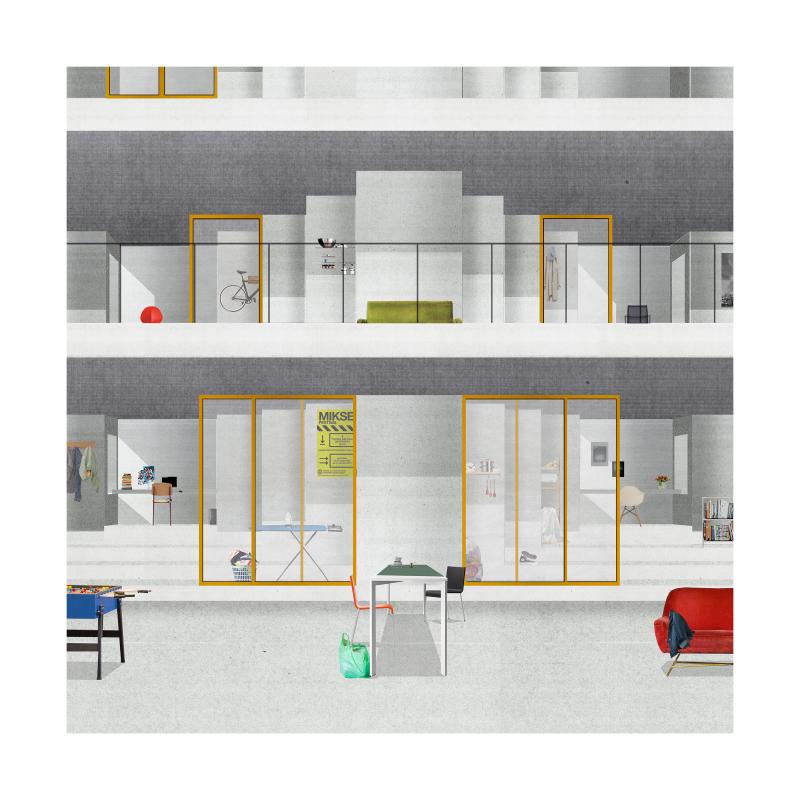 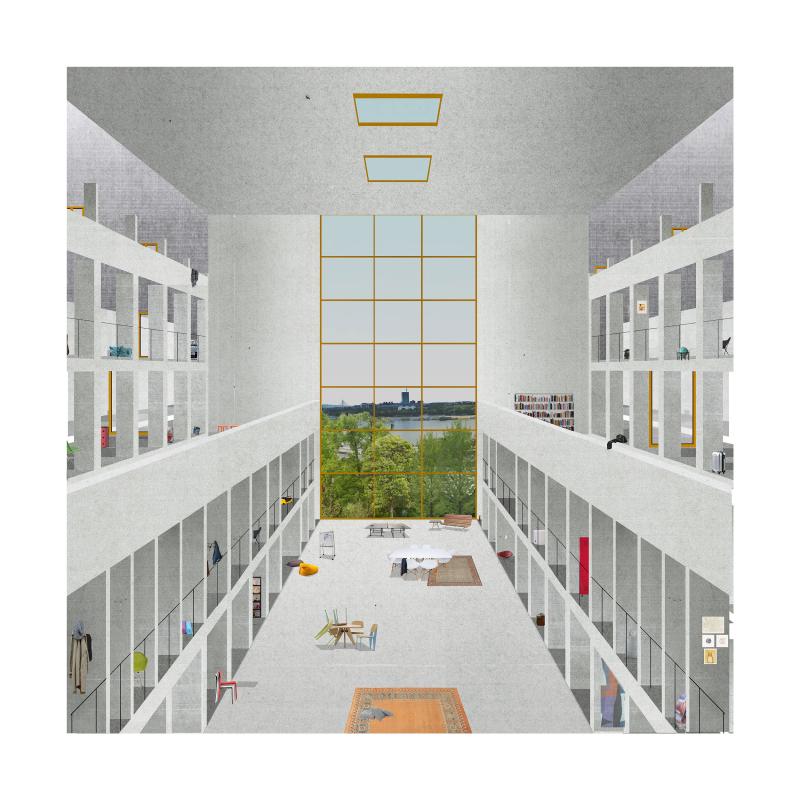 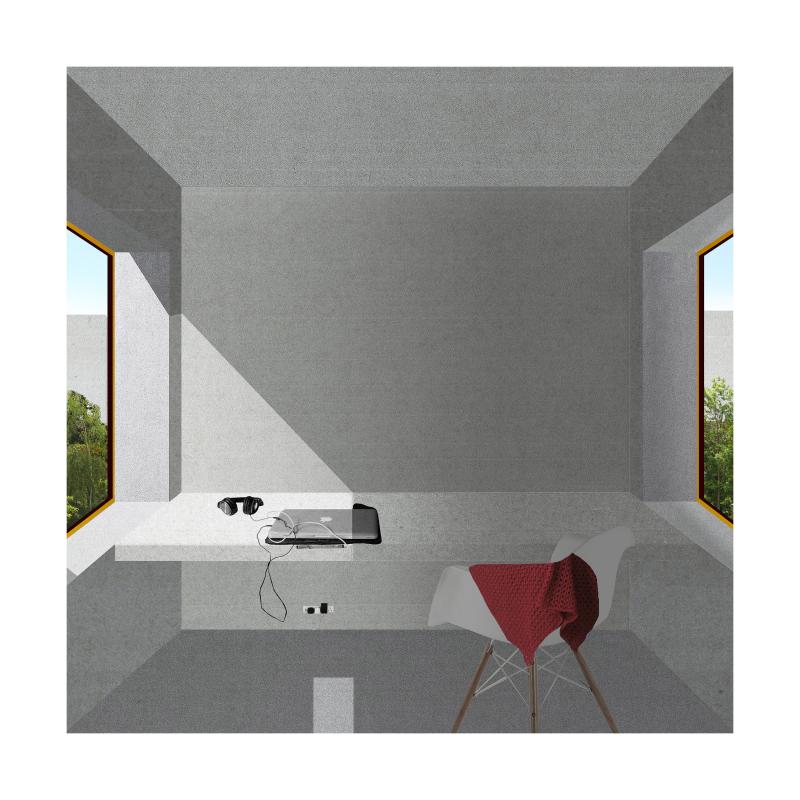