Preservation is rapidly becoming an obsession, where most recent and undistinguished structures are immediately preserved and speculated to be valuable in the future, while facades with most historic and cultural value are violated or “cloned”, adding to the absurdities of authentic and reproducible.

The aim of the larger project is to suggest an anti-preservation strategy, and focused on the façade as the most legible element of the historical and cultural image of the city. My aim is to preserve the most important quality of Berlin - its ability to constantly reinvent itself. I exaggerate that quality through series of fictional scenarios from the heist and processing to release, and that longer process involves a set of victim sites as well as a speculative façade depository.

This vast exchange will accumulate a bank of both historical and contemporary facades by stealing them from the city, and thus affecting value as well as rescuing these fragments from conventional intervention. Further, beyond simply curating and storing the facades, I render it as a dynamic element, test how it could interact with other samples, and thus create a new drive for architectural experimentation and construction in Berlin. In my technical study, I closely follow the fates of key sample facades from three target sites, and focus on a series of infrastructural, mechanical and services inventions - suggesting that the theoretical conjectures are also feasible. Once the facade crosses the long depository “river” and is either returned to its original site or forwarded to catalyse another, the legibility of whether it is an original, a fake or a re-invented version is blurred.

Translation from a physical world to a phantom space… a new type of architectural exhibition as a full scale demonstration… a preservation strategy which sustains Berlin’s sacred ability to re-invent its architecture… a construction system which questions the role of human beings in the coming age of architectural mechanical production… a collection of façades as an ultimate form of preservation... Façade Terminus

The resultant prototype emerges and is reintroduced back into the city to populate the site which it has been stolen from. This façade invade the space of the street and drastically change the way in which we perceive buildings.

I will bring you through the fate of one façade which I have stolen: the council state building. The first stage is de-contextualization, when a façade is stolen and is placed in the depository, the next stage challenges the façade in a singular operations, such as a partial ornamental demolition or duplication. Then the façade is colliding with another fragment through physical juncture before it is transcended and is translated into a phantom form, through holographic glass screen, projections, reflections. The exemplar becomes part of a collective entity, losing its singular identity.

The next architectural evolution will go beyond the reduced idea of an envelope and the glass screen, it will translate physical world into phantom space using available technologies. Space of the street will no longer be defined by façades, instead we will live in cities made of light, reflections, projections, media, communication, always in a constant state of flux. In this Ultimate form, there will be no longer a necessity in preservation, a war between the old and the new will seize, and architectural space will ascend to a new surreal form with its own rules and design techniques.

Façade elements begin to collide and create hybrids which challenge the current state in which the element of façade is. A process which can be illustrated as a physical operation in full scale demonstration or can be understood as a diagram, when façades are reduced to the core idea.

Schloss Façade Buffer zone being demolished in front of a crowd using hydro demolition mechanisms. Each zone of the depository process is designed as a spectacle being part of the new architectural exhibition.

The depository does not just house the stolen fragments, but throughout the process a lot is produced and created, in form of prototypes. What happens to these prototypes? They are ejected into the city using Berlin S-Bahn as an urban conveyor belt that stirs the image fabric of the city. 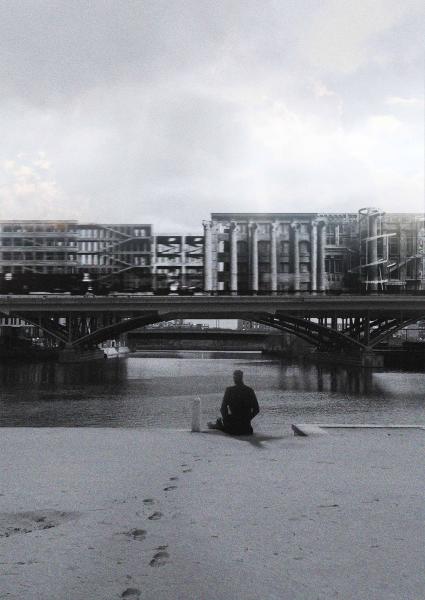 The programme is defined by two axis. The vertical axis exhaust almost every type of façades in existence. The y axis define a certain operation which is done in that zone, and when they collide, it gives every zone specialization. Despite giving the depository a rather strict system, it is designed to be broken. Which drives the process of re-invention and experimentation. What happens when an ornamental façade enters a structural zone? What happens when a symbolic fragment ends up in media zone? This is when opposite specializations have to work together to produces the unexpected.

How do we render architecture autonomous? I believe the answer to this question lies by challenging the way in which we exhibit architecture, the depository which houses the collection abstracts the image the façade from the urban and temporal context and therefore renders it autonomous. Allowing the façade to be challenged in impossible ways, both in urban simulations and its physical form.
Ultimately I am not exhibiting façades, I am exhibiting life of an architectural space or an image, from the creation of an idea to its realization. The depository embraces construction and it celebrates demolition.

A battleground, between the old and the new, between retention and progress. A war that always rages on in architecture and takes place of the in transnational realm between the exterior and interior, the space of the image: THE FAÇADE. In this new context, old and new can interact in one plane, new can wrap the old, it can create a programmatic void in between, going all the way to the most extreme examples when objects are juxtaposed in Space or spaces collided in Urban context.